Testimonials & Words of Thanks

“Paul was great. I called him about my electrical issue in the laundry area and explained to him how I hadn’t been able to use my dryer for over two weeks. I asked if they could squeeze me in ASAP. He told me that he would try to re-arrange his schedule and would try to stop by to take a look in a few hours.

Two hours later, he showed up and inspected the electrical system in the house; spent a little more time and immediately he knew wires were cut off. After spending a good amount of time, he was able to find out exactly where the wires were cut and rewired them back. He even went above and beyond as he realized this was a mistake made by a roofing company that did some prior work for me. He worked with the roofing company and was able to convince them it was a mistake. As a result, they paid for the bill.

Paul is great and a very honest businessman. I’m very pleased with his service and price. I’m certainly looking forward to doing continued business with him in the future.”

“Great experience. WIRED Electrical Contractors has very nice and honest guys. They made great recommendations, picked up new fixture, and completed the job quickly and seamlessly. Paul was unsure what wattage to go with so he put in one with the offer to come back and swap to the brighter flood if, after dark, we decided we wanted more light. He checked in the next day to see what we thought and I requested the brighter light and I have no doubt he will be here soon to swap fixtures (only charging the difference in fixture cost). I am not sure what more you could want from an electrician. Paul takes pride in every aspect of his work and his team does the same.”

“I needed an electrician on short notice to install an outlet for a stair lift and a second one in my basement. Both outlets are on one new circuit breaker that they added to the panel and the outlet in the basement is a GFI for safety.

Paul (and Alex) came to my home at 7 AM on Friday so I could minimize the amount of time that I had to take off from work and be ready for the stair lift installation next week. They showed up exactly on time and completed the work in one hour.

They did a nice, clean installation on both outlets and even vacuumed up the plaster and debris, leaving the work areas spotless. I highly recommend WIRED Electrical Contractors and Paul Crowley to anyone who needs electrical services!”

“They did all of the wiring in a bathroom remodel. This required two home runs as well as adding a new subpanel. Paul and Sean were professional and courteous. Also, they cleaned up after their work so you would not even know they had been here. I plan on using them again for the next bathroom remodel.”

“Wired the house for a generator and performed a slew of corrections and upgrades to interior lighting and exterior. Very professional and helpful. Will continue to use their service.”

“I have used Paul Crowley from WIRED many times. He has been absolutely invaluable in doing a number of electrical projects. He answers his cell phone immediately, is most accommodating for scheduling, and does first-class work. I first got his name from Angie’s List when another electrician (not on the list) left a project unsatisfactorily finished. I have used him exclusively since then (about four years). He rewired my kitchen when I was updating it, installed new LED lighting, and updated my outlets to bring them up to code. Most recently he disconnected and took down a chandelier and took apart my Invisible Fence, both prior to moving. He is meticulous about how he does his work and makes sure everything is cleaned up before he leaves. I recommend him without reservation.”

“I initially called Paul on Labor Day weekend after a lightning strike right outside my house. I had several electrical problems as a result; numerous things had fried and were no longer working. He helped me understand what had happened and got my garage doors working again, repaired outlets that weren’t working, replaced the outdoor sensor light on my driveway, and most importantly, installed a whole-house surge protector so I will never have to worry about having this happen to me again. Paul is so responsive. I was so nervous about the risk of fire, not knowing what damage had been done to my home and its wiring. He returned my call within a few hours on Sunday and came at 8 AM the next morning—on Labor Day! He checked everything out and assured me that my home was safe. He repaired my garage doors first. As I discovered more things that had been affected, he came back several times to fix them all. One morning he came to work in my garage at 6 AM so that he could get the work done before I had to leave for work at 7 AM. He schedules appointments quickly, and always showed up when promised. He even texted me after all the work was complete to make sure I was satisfied!

It’s worth mentioning that out of five electricians I contacted for ‘emergency service,’ Paul was the only one who responded that day. And only one other person called two days later. Three of them never responded to my call, ever. Don’t waste your time with anyone else. Paul knows what he’s doing, and he will be there when you need him.”

“Paul did a great job. We had a bathroom fan replaced, two light fixtures installed, wall-mounted a TV, and replaced several outlets and switches. He also ran TV cables behind the wall and performed some other small jobs (like replacing light bulbs on a high ceiling and inspecting ceiling fans).

All of the work was top quality. Very happy with the bathroom fan and TV wall mount with wires hidden in the wall. Stuck to his original estimate and didn’t even charge for any of the odd jobs I needed help with. The follow-up has been great. Since this is our first house, we’ve had a lot of questions about how to improve and maintain our electrical. We will use WIRED again next time we need help.” 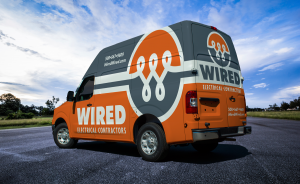